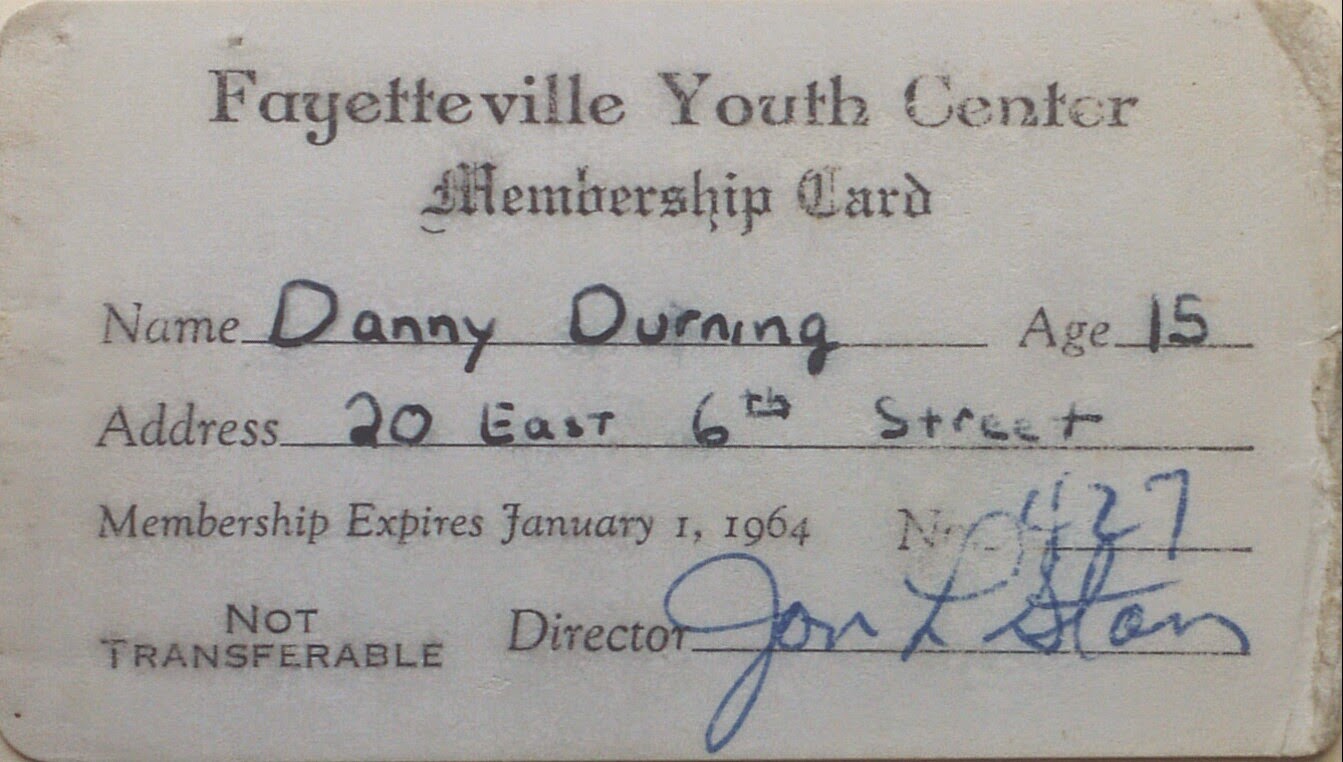 The Youth Center was a great place to hang out when I was in junior high school. After graduating from high school, I spent much time there during my first couple of years in college working part time as a basketball coach for elementary and seventh grade teams.
Posted by Dan Durning No comments: 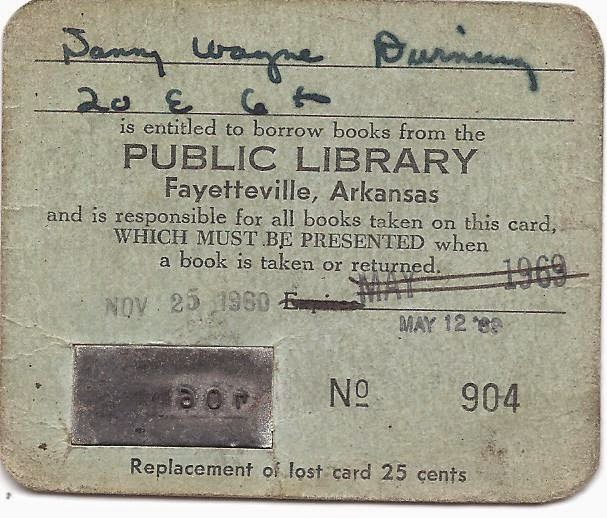 Before the Fayetteville public library was at its present location and before it was in its previous building on E. Dickson  Street, it was located up a steep flight of stairs in a building on West Mountain Street, just down the block from the Ben Franklin store at the southwest corner Mountain and S. Block Avenue . I think I started to use the library regularly when I was in the 7th grade. I checked out lots of teen books with a plot involving baseball.

The card shown above was issued for use at the new library building on Dickson Street that had replaced the old one on Mountain Street. It was part of the latest in book check-out technology. With the card shown above, you needed only to present the card and the book to the librarian. The card was inserted into a simple machine that stamped the number onto a check-out card, along with a due date, and you were done.

Email ThisBlogThis!Share to TwitterShare to FacebookShare to Pinterest
Labels: 1960, Fayetteville 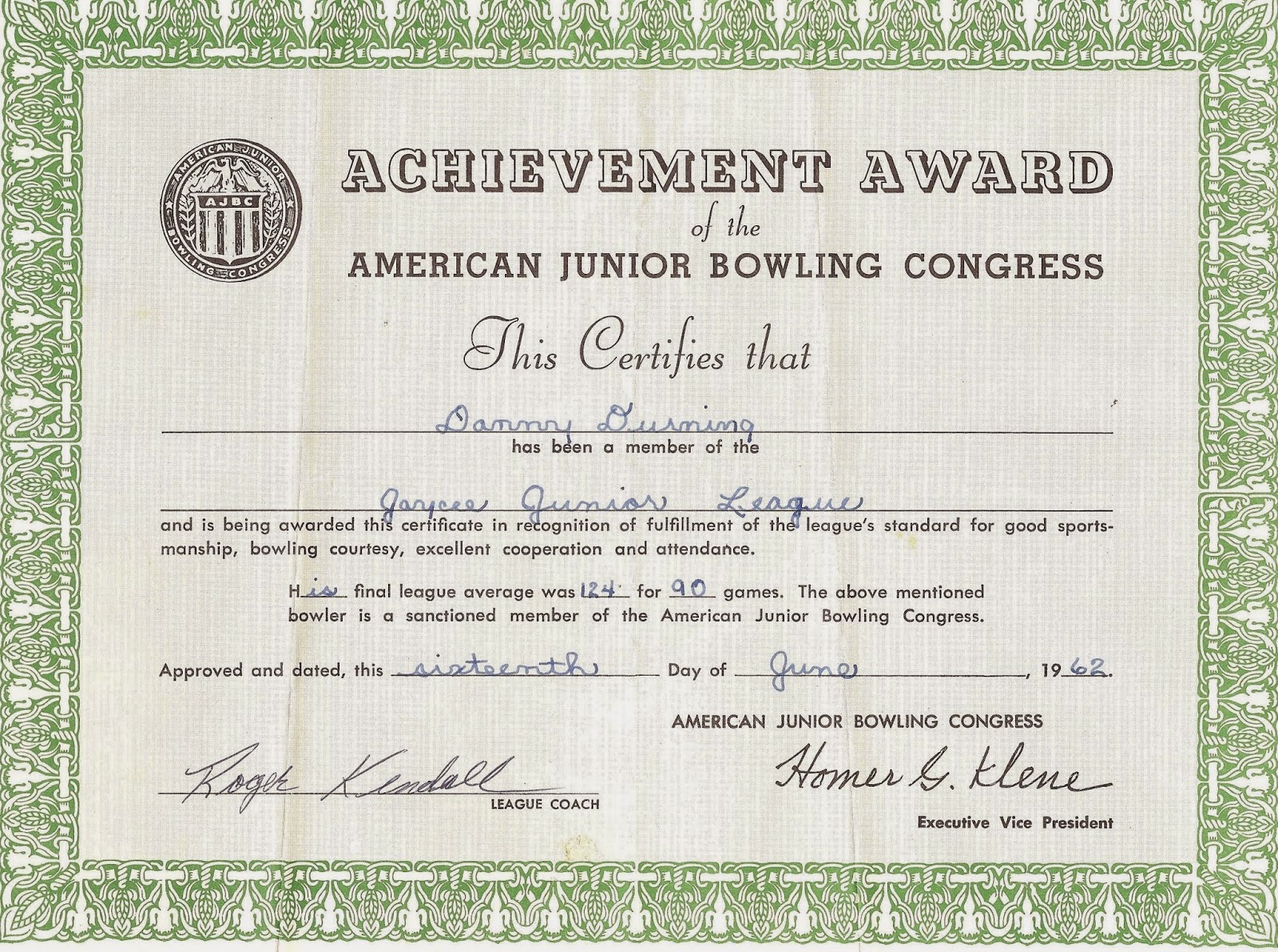 I joined a Saturday morning bowling league in 1958. To do so, I had to give up piano lessons with Mrs. Delano, a kindly woman who went to the church I attended. Her hobby was painting rustic scenes on rocks. I think took my decision to stop taking lessons with with disappointment. We both understood that I was too lazy to practice the piano regularly and had no special musical talent.

While quitting the piano lessons disappointed my grandmother and my parents (they had bought me a piano), I was quite relieved to be heading to the Ozark Bowling Lanes on Saturday mornings instead of butchering some simple-minded piano tunes because of my lack of practice.

My dad, who worked at the Arkansas Western Gas Co. at the time, had been in a weekly bowling league on the Gas. Co team. He seemed to enjoy it and the group of men had lots of fun. I went with him some nights and mostly hung around the pinball machines. When I had a few extra nickels, I would play a machine with a baseball game. For this game, the player controlled the bat and swung at pitches offered up by the machine. More often than not, I did not get enough runs to win extra games, but it was a sweet feeling when things went well and the I got enough runs to hear the machine giving me free games.

I learned to bowl pretty quickly. An elderly man with thinning white hair ran the league taugh me the basis and was very encouraging. He seemed to always be in a good mood. Among the other bowlers, I recall Ricky Cowen, Carl Gabbard, Larry Bentley and Newt Land.

The second year, my bowling team won the league championship and ranked highly nationally. Somewhere in storage I have a trophy. I used to get it out to look at it when I started feeling bad about quitting piano lessons. 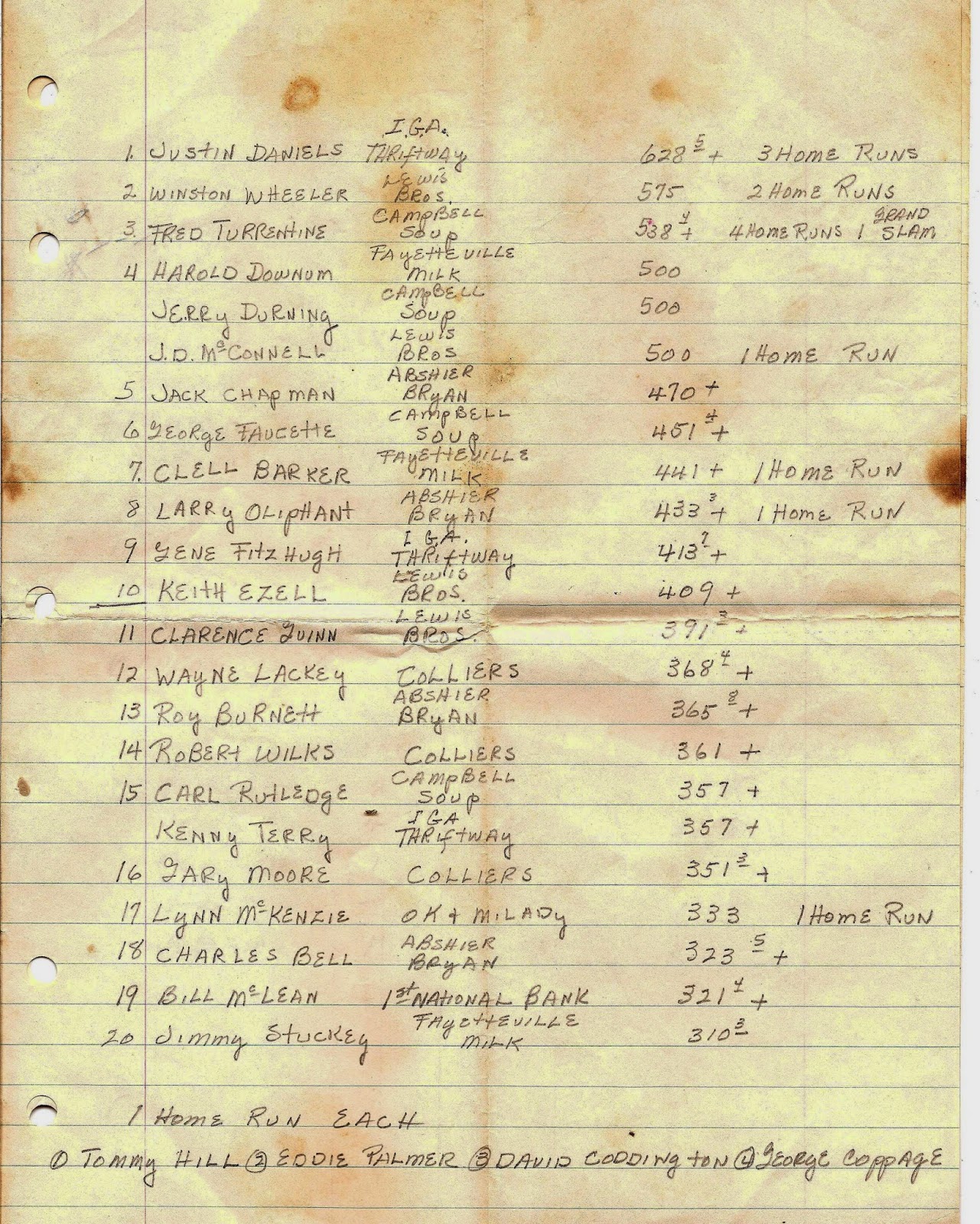 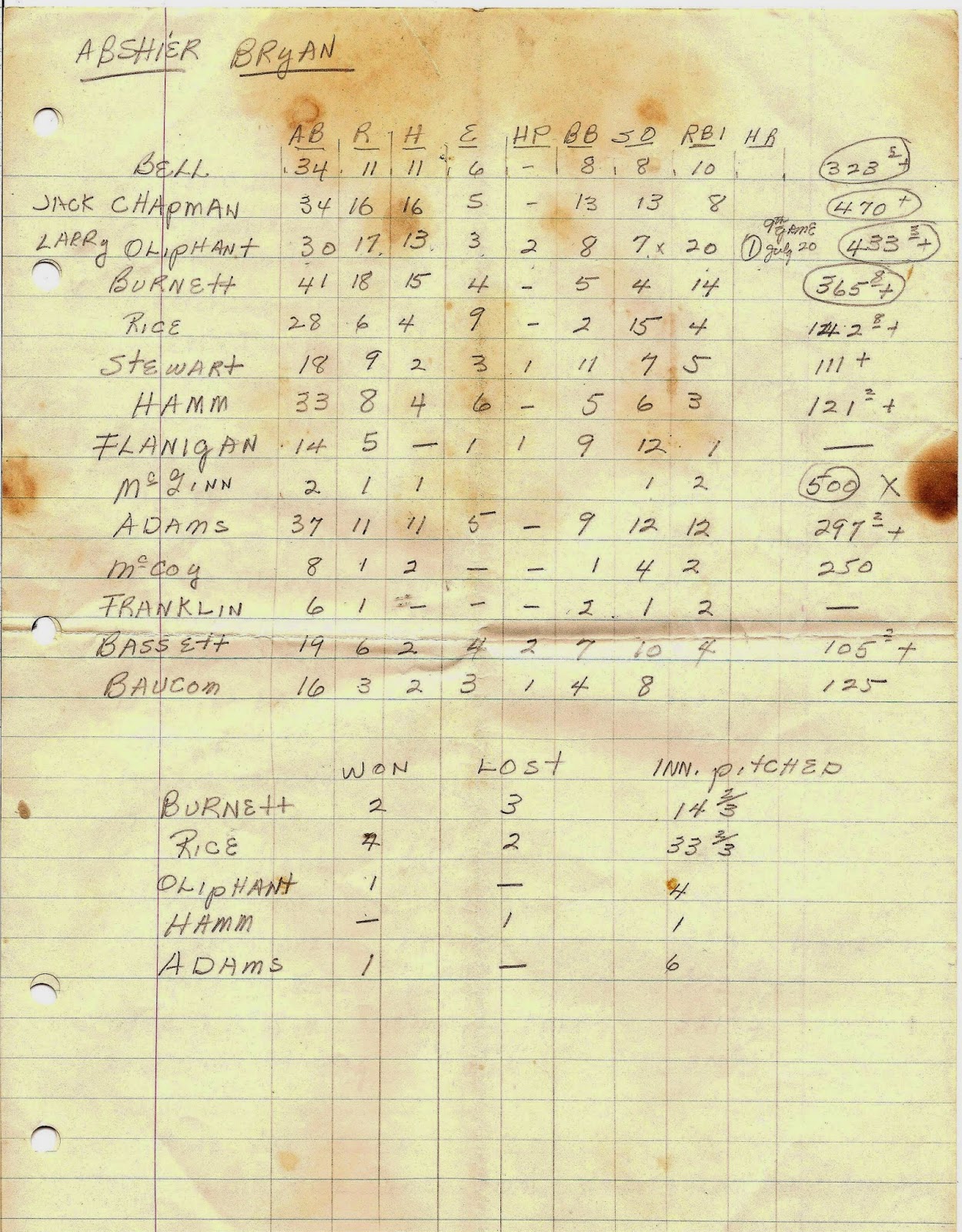 I am not sure who put together these statistics, but I found them in a pile of my parents papers. One page shows the top batting averages for the 1959 Babe Ruth League. The other page has batting and pitching statistics for the Abshier Bryan team.

It seems that these statistics might be for the entire season: the Abshier Bryan statistics show that the team had won 8 games and lost six.

The names on these two sheets include many players that I looked up to.  At the time I was 12 years old, in Little League, and I had been watching these older players for years. Many of them, I knew from neighborhood games at the baseball field at Jefferson School.

Two of the players with the highest averages were my cousins. Justin Daniels led the league with a phenomenal .628 average. He had three home runs. Jerry Durning had a .500 batting average. Other familiar names on the list of top batting averages, Winston Wheeler, who lived on S. Washington Ave, near my cousins Justin and Morris, had a great record collection and was a fan of Ronnie Hawkins; Kenny Terry, who also lived on Washington Ave not far from Justin and Morris; and J.D. McConnell and George Faucette, who teamed up with Justin to make Fayetteville a formidable basketball team during the 1961-62 season; and . Several on the list were only a year or so older than me, and i played baseball, basketball and/or football with them in coming years, including Robert Wilkes and Harold Downum. 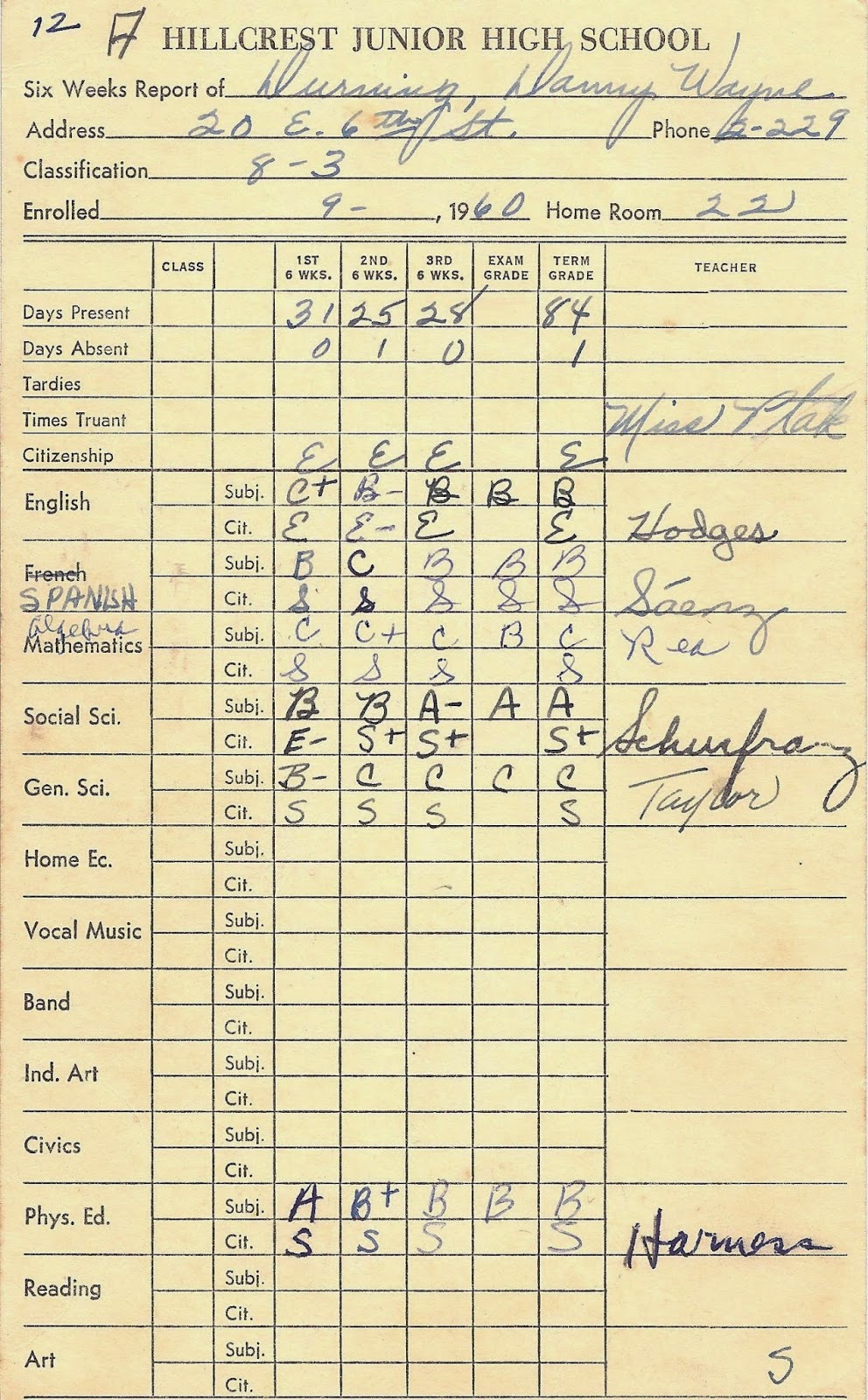 I forget how poorly I did in the 8th grade. I even got a B in physical education from Coach Harness. My only excuses for poor grades are that I was much more interested in sports than in studying and, as Mr. Taylor told my parents at a conference with them, I was exceptionally lazy. I had been put into accelerated classes when arriving at Hillcrest Junior High School and had some tough competition from students were more diligent and, in many cases, smarter than I. So, I muddled through the 8th grade and got smarter and a little more diligent as years went by. (I have to hide this grade information from my friend Natalia, who swears she always earned top grades and best-of-class awards when she was attending school in the Soviet Union and from my 12-year-old godson Danielka who is always being pushed to get better grades in his Russian school.)
Posted by Dan Durning No comments: 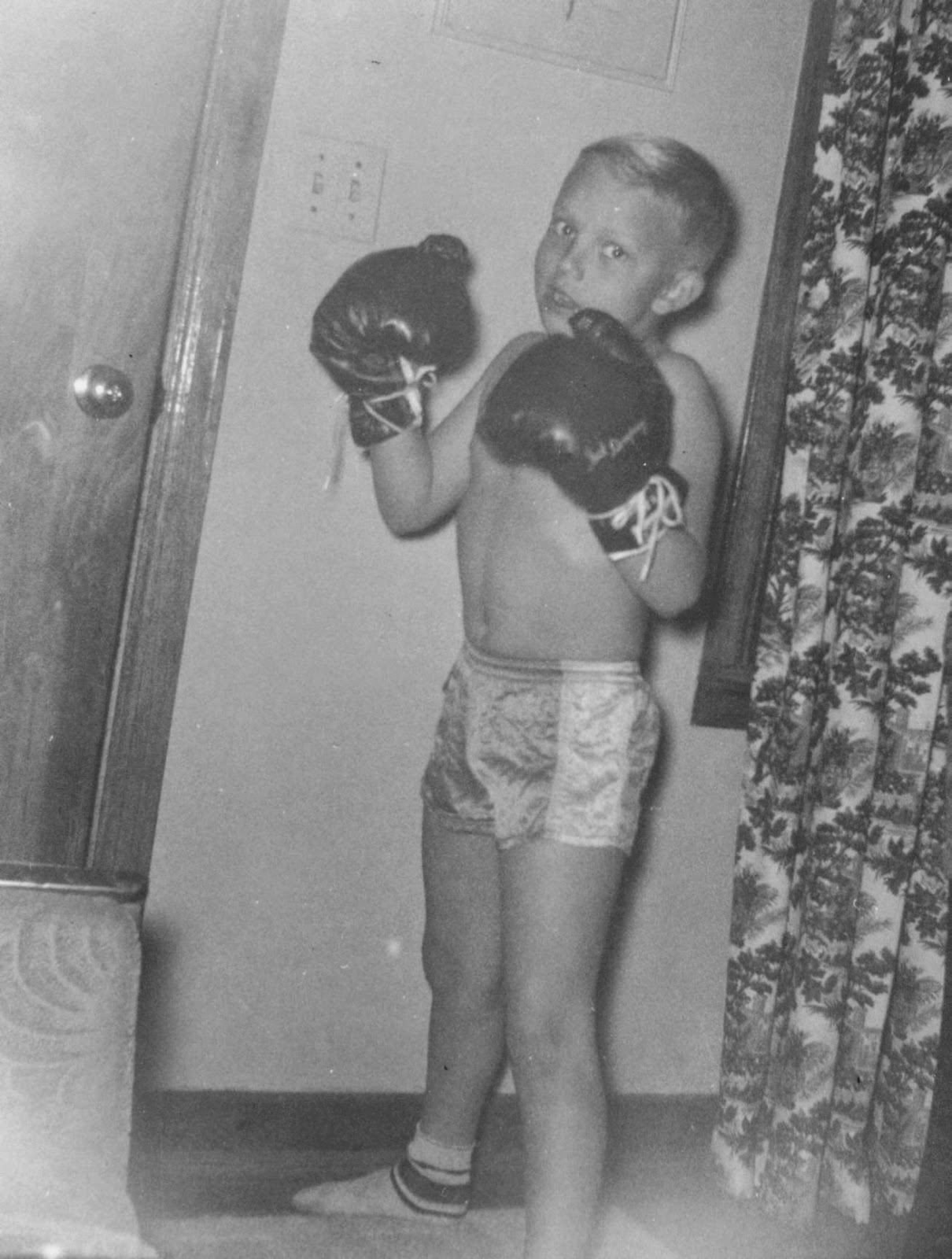 My dad was a big boxing fan. One of the earliest thing I recall was going on Friday nights to watch the fights on a television in the window of the local power company.  Later, before we finally got our own television, we went some Fridays to watch especially important boxing matches on a television at Wayne Stout's house on South College, a few blocks south of Jefferson Elementary.

With this introduction to boxing, I became a fan and wanted to be a boxer myself. So, the Christmas when I was in the third grade (1955), I got a new pair of boxing gloves. With those gloves, a swim suit, and dirty socks, I was ready for battle (see picture above).

In the third grade -- I had spent the second grade at Robert E Lee Elementary in Springdale --  I started going up the College Avenue hill from Jefferson Elementary to the gym of the National Armory to take part in the sports there, including boxing. I know it was the third grade because I occasionally got Mr. Trahan, my 3rd grade teacher, to give me a ride there.

I am not sure if the Armory gym served as a Boy's Club or whether the after-school program was  city-financed.  I just remember there were lots of boys there every day. One of them, I remember, was an older guy (probably a teenager) who wanted to be a boxer, and he would jog around the edges of the gym holding a stool in one arm that was extended to his front. It did not look like fun and I wondered why they would do that.

One of the activities at the gym for smaller kids like me -- one of its attractions -- was boxing instructions. So, I got a chance to learn the basics of pugilism and, after a while, thought I was pretty good. I was usually beating the boys I fought with ease. Then one day, Coach Joe Holt, who was working there, pulled me over and put me in the ring to fight a scrawny Black kid who was quite a bit smaller than me. I had never seen before (interesting that in 1955 the Armory sports programs were integrated but the grade schools were not).

About 30 seconds into the first round, I realized that I was outmatched. My opponent was must quicker than me and he hit harder than anyone I had ever boxed. When he popped me hard a couple of times, I started wondering when the round would be over.

By the end of the first round, I had had enough of this foolishness, but Coach Holt told me it was a two-round match and that I would continue. I guess he had seen me rough up some lesser opponents and wanted to let me experience such treatment myself. Or maybe it was a lesson in not quitting. I spent a miserable three minutes in the second round backpedaling, trying to minimize the damage to my body. When the fight was over, I was very happy that I still had all of my teeth, even though my dignity was badly bruised.

After that day I put my boxing gloves in the back of the closet and starting spending much more time in the Armory playing ping-pong.
Posted by Dan Durning No comments: 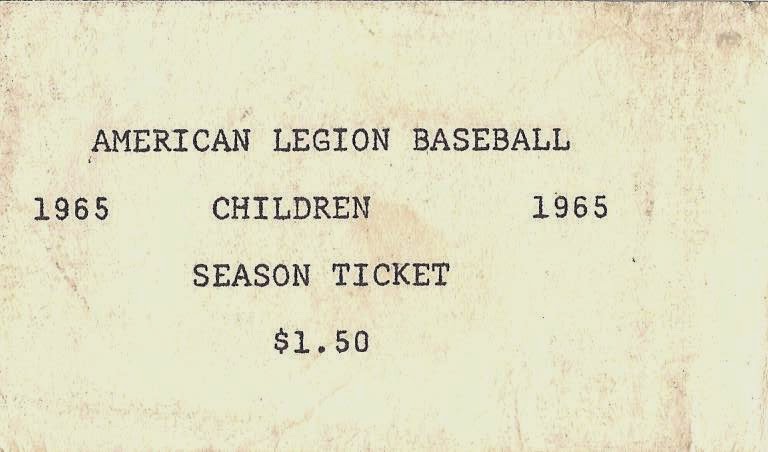 I did not recall that admission was charged to attend American Legion Baseball games. The games were held at the baseball park at the old fairgrounds, and it was fenced off, so it was possible to channel people through an entrance gate and make sure they had a ticket.

Over the years, I watched and played lots of games at the fairgrounds baseball park. My first memory of it was when I, aged 9, tried out for a little league team. I vaguely recall a flock of kids being divided into groups, then going from station to station where we were tested on our ability to field a ground ball, catch a fly, and hit some soft tosses.

I was pleased when I heard at the end of the day that I had been selected to play on McIlroy Bank team and I remained on that team for the next four years. Among my coaches during those four years were Tony Adam's (FHS '65)  dad, Charles Crittenden's (FHS '65) brother, and Steve Halliday (FHS '65) data.

During the last four years I played oranized ball, the home games were at the fairgrounds park. Three of the years were playing American Legion ball; the fourth year was playing on the Razorback's freshman team.

I was sad several years ago to find out that the park had been demolished.
Posted by Dan Durning No comments: